On Thursday January 30th, Ed and myself arrived in Bangalore for the third and final city of our sprint around India. We were tired, footsore and moving slowly towards home. But before we did this we had something important to do. The following day GeoMob was to meet up with GeoBLR and hopefully some of the Bangalore maps and geo community. There was much to do, including a frantic finishing of slide decks for the talks we’d been invited to give. Friday dawned and the sun shone down on Bangalore as Sajjad and Sumandro from GeoBLR met with Ed and myself for a spot of planning over breakfast. 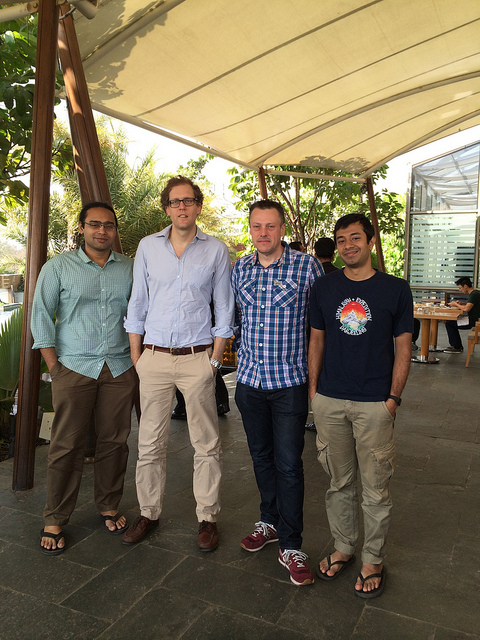 That’s Sumandro on the far left and Sajjad on the right, with Ed and myself sandwiched inbetween.

Decks finished and talks polished, we headed around the edges of Ulsoor Lake to the Cooke Town suburb of the city and were greeted by Sajjad, Sumandro as well as by Kaustubh, the trio who make GeoBLR happen. Cold beer and fresh hot samosas were dispensed as a great turnout of the Bangalore georati assembled. 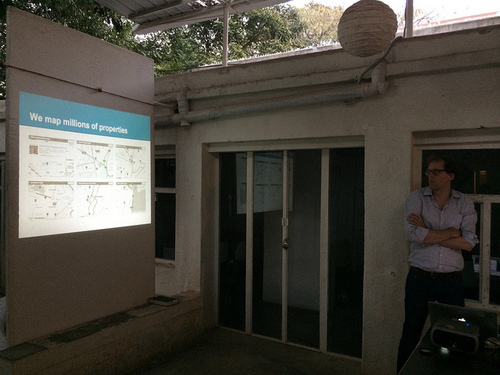 Under a canopy in the garden, surely a #geomob first, Ed started the proceedings with a talk about the challenges behind Geocoding India. In true Indian fashion, the power gave out and the backup generator kicked in but unfazed Ed forged forward and finished his talk without even pausing. Ed’s slide deck is now up on SlideShare. 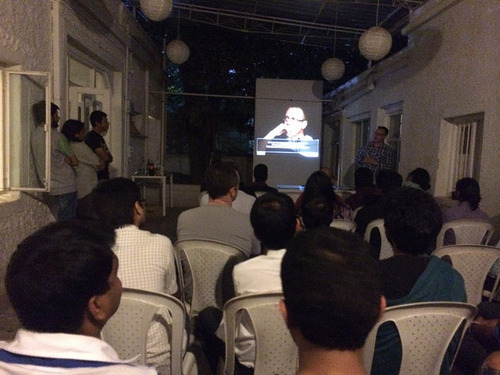 Geobeers already having been consumed the GeoMob and GeoBLR teams adjourned to the Mangalore Pearl in nearby Frazer Town for possibly the best Indian food I’ve had and then all too soon the evening was over and we wended our way back to our hotel with the aid of a passing Bajaj. 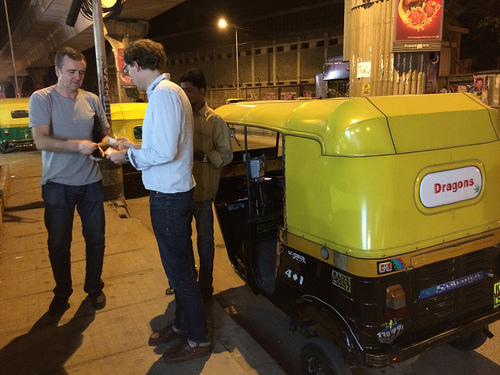 Massive thanks are due to Sajjad, Sumandro and Kaustubh for making us feel so at home and to everyone who attended, took the time to chat to us and expanded our horizons. Hopefully GeoBLR will come to London sometime soon; there’s some major hospitality to be returned.

For those of you in London feeling a bit left out, don’t worry, we’ll be back on March 13th for the next round of interesting, cutting edge, stimulating and frankly way out there talks followed by the time honoured tradition of retiring to a nearby pub for some London geobeers. The speaker list for May is coming together, if you want to take part get in touch.